In my last post, I discussed the difference in emission area size between inorganic LEDs and OLEDs, and how it drives many of the choices lighting designers must make when integrating these devices into solid state lighting (SSL) fixtures. In this post, I will discuss the second significant difference: the way a broad emission spectrum is created with each technology, and how that impacts their illumination characteristics.

The crystal structure of inorganic LED materials tends to produce a narrow EL spectrum that can appear pure in color to the human eye. Although many ways of producing white illumination have been demonstrated with inorganic LEDs, the most economical approach is to combine short blue wavelength electroluminescence (EL) from the device with yellow (or sometimes green and red) emitting phosphors coated on the external surface of the LED. The phosphors absorb the LED emission, and re-emit at the lower wavelengths in a process known as photoluminescence (PL). The blue EL from the inorganic LED and phosphor PL are combined to construct the broad spectrum required for white illumination. It is worth noting that it can be difficult to achieve sufficient spectral power density in the red region with this approach, which is why fixtures using inorganic LEDs can sometimes have a lower color rendering index (CRI). In addition, white illumination generated in this way can contain excess short blue emission, particularly for more neutral and cooler color temperatures, which can be detrimental for human health.

In OLEDs, dopant EL can be narrow or broad depending on the molecule design, but typically the emission from a single molecule is not broad enough for white light SSL applications. Although several approaches have been demonstrated, the most successful for producing efficient white light emission is to integrate blue, green, and red organic host-dopant pairs into one device. These systems must usually be placed in separate emission layers for good spectral control and high efficiencies, which is straightforward with OLED materials due to their amorphous layer structure. Usually, there is one ‘stack’ for blue emission, and another for red and green (or yellow), with flexibility to choose the dopants and levels in order to optimize the overall EL spectrum. It is worth emphasizing that all emission layers are excited directly with the electrical current, instead of relying on photon absorption and reemission to achieve the longer spectral wavelengths. This gives more freedom in balancing the illumination across red, green, and blue such that the broad spectrum SSL based on OLED technology has high color rendering index (CRI), typically over 90. This flexibility is also the reason why OLED lighting does not have UV wavelengths that can be damaging to the eyes and skin, nor excess intensity of blue wavelengths that can potentially interfere with processes related to human health. 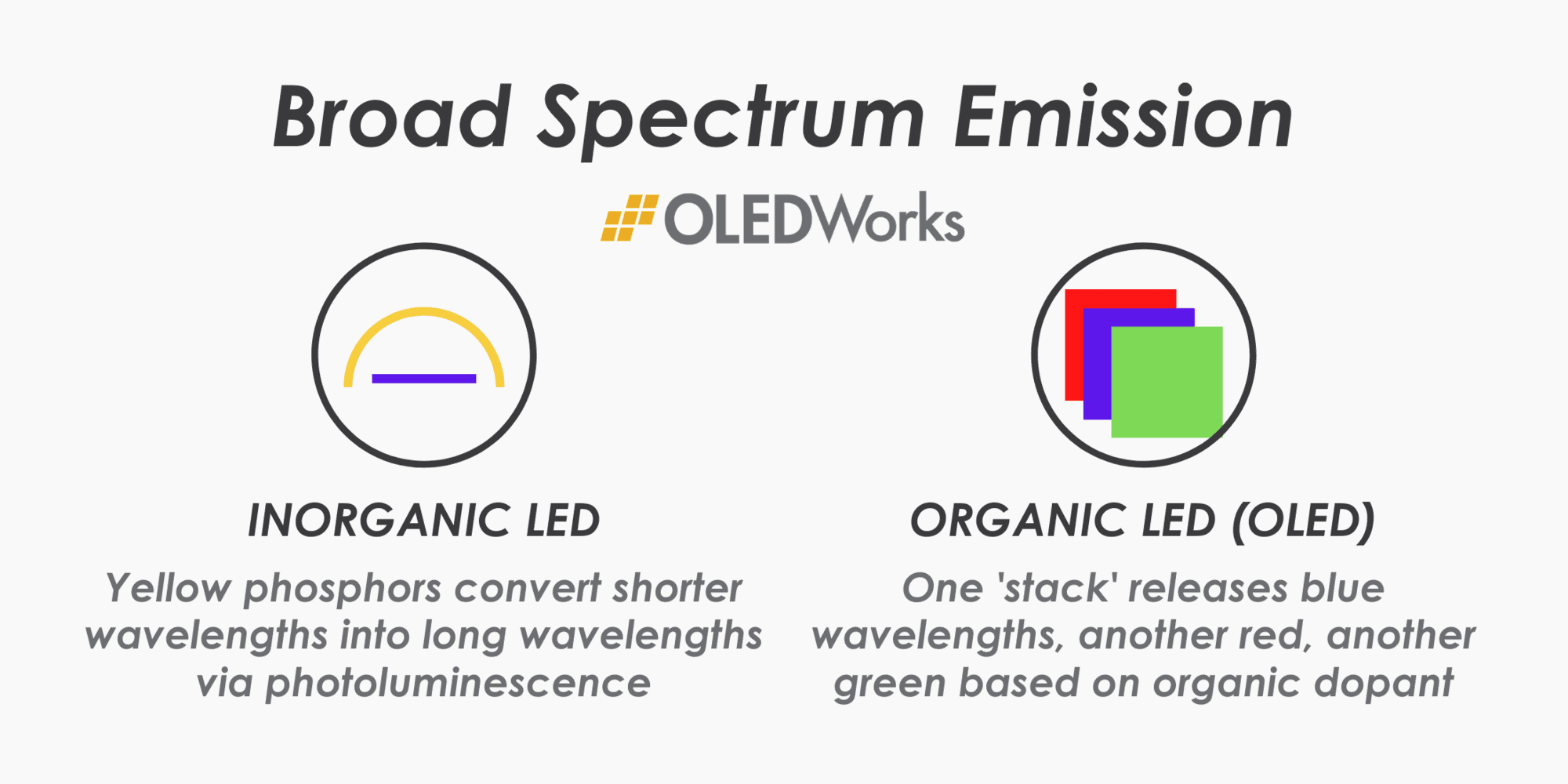 As diodes, inorganic LEDs and OLEDs are inherently direct current (DC) devices and can be operated as such in SSL fixtures if desired. The advantage of DC operation is that there is no risk of illumination flicker, which can cause eye strain, fatigue, and headaches. With DC operation, the illumination output can be dimmed by reducing the amount of current delivered. However, with both inorganic LED and OLED technologies, the emission spectra can shift as the current is reduced due to differences in the emission efficiencies of red, green, and blue light generation. Inorganic LEDs SSL typically shifts towards cooler color temperatures with dimming, while OLED SSL shifts towards warmer color temperatures, the latter of which is usually preferred at dimmer light levels. Both technologies can be driven with pulse width modulation (PWM) to achieve dimming, and with proper driver design, can produce illumination that is low in flicker.

Of course, no discussion of inorganic LED and OLED lighting technologies would be complete without addressing operational lifetimes. For inorganic LEDs devices, operational lifetime is mainly affected by heat, either due to the use of high current densities, or insufficient heat management in the fixture. With proper design, operational lifetimes can be in excess of 100,000 hours, depending on the conditions. While the inorganic materials are very robust, the complexity of the fixture, with the many electrical and thermal connections used in building up the array, can present opportunities for failure, and it is important that manufacturers take the proper steps in design and robustness testing in order to ensure good quality.

OLED operational lifetimes are mainly proportional to the amount of electrical current they are exposed to. Long lifetimes are achieved by increasing device efficiency, which reduces the required current for a specific illumination output. In OLED lighting, this is done through a combination of proper host-dopant selection and device design. In particular, OLED lighting manufacturers can again take advantage of the amorphous nature of the organic layer structure and incorporate multiple blue and yellow EL stacks in the same device, which increases the illumination output for a given amount of current roughly proportionally to the number of stacks used. The current state of the art for OLED SSL is a six-stack device architecture, which exhibits over 100,000 hours of operational lifetime, which is sufficient for general lighting applications. Heat can also be a factor with OLED SSL operational lifetimes, but it is worth noting that the technology is now being commercialized for external automotive lighting functions such as the taillight, which must be qualified for temperatures up to 105 ºC.

Inorganic LED and OLED SSL offer different general lighting experiences, giving designers a wider range of options for achieving their vision for illuminating spaces. In some instances, the characteristics of the two SSL technologies can be very complimentary. Good examples of this are embodied in Acuity’s Peerless Olessence and Nadarra’s Rex 2, which are indoor lighting fixtures designed for office, commercial, and hospitality spaces such as meeting and guest rooms, lounges, common areas, bars/restaurants, entryways, bathrooms, and hallways. These fixtures capitalize on the soft and diffuse output characteristics of OLEDs, which are used for direct illumination, and combine it with the power of inorganic LEDs for indirect lighting from the fixture. The overall effect are sleek and elegant fixtures that merge the best attributes of both technologies, providing a brand-new illumination experience.

The performance of inorganic LED and OLED SSL has climbed significantly over the past ten years to the point where performance and cost meet market needs. This trend will continue as new materials, device structures, and manufacturing approaches are introduced. With the proliferation of these technologies, we are moving toward a world where both inorganic LED and OLED lighting are integrated into our products and spaces in new and exciting ways.