Why Does OLED Light Feel so Good?

Suzhou Applic-Info Home Technology Co. is a company founded by a group of “geeks” – chemists, architects, biologists, designers, marketing experts, and more who are passionate about OLED lighting. We provide full scale services from the design and manufacturing to marketing of OLED products. As a member of the OLEDWorks Channel Partner Program, we are dedicated to creating the highest quality OLED lamps and fixtures, providing superior lighting that is healthy and comfortable.

Because of the COVID pandemic, the number of people who work and study at home has soared. We have seen more than a 12.6% increase in laptop orders, and many of my friends report that after using stroboscopic LCD screens for extended times and reducing outdoor activities, visual fatigue has intensified and begun to affect life and work. I think this is a big opportunity for healthy lighting. Visual fatigue, eye health and other healthy lighting topics before the pandemic mainly focused on the prevention and control of juvenile myopia; after the pandemic, it has become a concern for the whole of society.

From my first contact with OLED light, it seemed to have a kind of magic to attract us – in the light of OLEDs, we feel naturally calm and focused. After that, I spent a long time thinking about the causes of this feeling. What’s so good about OLED? How can we persuade consumers to accept the price difference over LED to buy OLED products? I know that OLED light has an unparalleled texture and feeling, but how can I deliver it to consumers? Or is there something deeper to be discovered besides feeling?

The Biology of Light

When light reaches the eye, it first passes through the cells unrelated to light perception, then reaches the light sensing cells behind the eyeball, and then reversely transmits to the optic nerve. Therefore, there are no photoreceptors in the location of the optic nerve, forming a blind spot without visual information. Because human beings have two eyes, and the brain has a strong information processing ability, these blind spots are removed in the later visual information processing.

Stem cells are widely distributed in the retina and are mainly used to form dark vision. They can only recognize black-and-white images. Rod cells are highly sensitive and can be activated by one or two photons. After light enters the rod cells, opsin regulates the potential by changing the ion channels in the cell wall, and the potential is transmitted to the brain to form vision.

The cone cells in the fovea are responsible for the fine depiction of light vision. There are three types of cone cells in the foveal region of the retina, which are S-shaped for blue light (short wavelength), M-shaped for green light (medium wavelength) and L-shaped for red light (long wavelength), respectively. The light signals sensed by pyramidal cells are transmitted to ganglion cells via bipolar cells, which are transformed into current signals and transmitted to the brain. 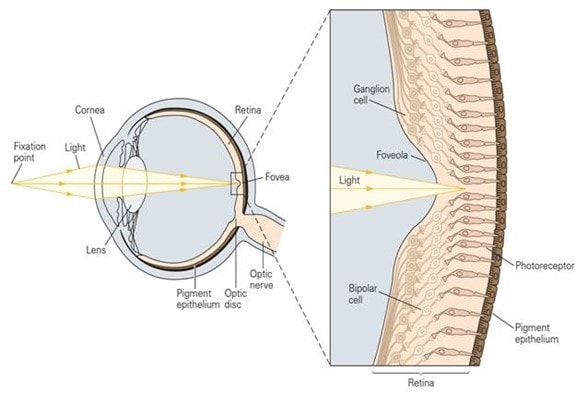 We receive a huge amount of visual information data every day. The amount of data passing through the human eye per minute is about 140.34gb, which means that 8tb of data is transmitted to the brain in an hour. Roughly speaking, the brain consumes one-third of the human body’s total energy consumption, while the visual system consumes 46% of the total brain energy. In other words, one sixth of the energy you consume every day is supplied to the visual system. The visual system plays an integral role in any living creature, but it is a very expensive organ.

With such a large portion of our daily energy dedicated to our visual processes, it is crucial that light is perceived and transmitted efficiently.

Advantages of OLED Light to Our Health

Ultraviolet and visible light in the short-wave blue range is extremely high in energy and has a destructive effect to organic macromolecules. Human skin cancer is mainly caused by the excessive ultraviolet in sunlight. This is why the weather forecast contains UV index and sunscreen recommendations.

If it is not well protected against, ultraviolet light will enter the interior from the outside of the eye, causing damage to cornea, pupil, crystal, retina, etc. According to data, there are about 24 million people suffering from cataracts in the United States alone, with many of these cases attributed to ultraviolet ray exposure. The traditional fluorescent lamp and blue LED lamp are excited by ultraviolet light, resulting in too much ultraviolet and high-intensity blue light, and there are health hazards that can result from long-term use.

OLED lighting is certified (IEC 62471) for no photochemical UV risk to the skin or cornea.

In this process, most of the consuming receptors are turned on – except for the blue light sensitive S-shaped cone cells (the smallest proportion). But most of the output channels are in blocking or inefficient states – they perceive the light, but the information cannot be transmitted, resulting in increased amino acid and ion consumption. 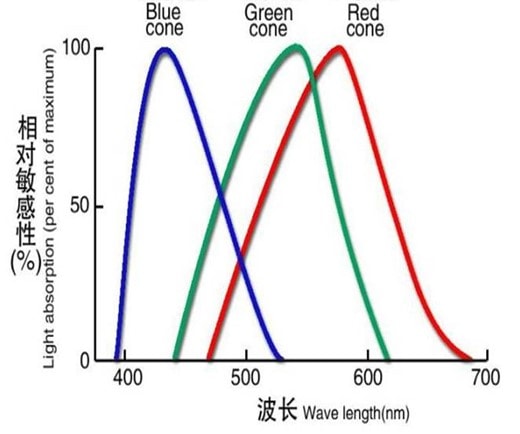 I think this is the key factor of low vision fatigue in OLED. Compared with LED or other traditional light sources, the spectral curve of OLED is more special. There is a wave peak in the blue, green and red frequency bands, gradually increasing. This is exactly consistent with the operating mechanism of the human visual system. The reduced luminous flux in OLED lighting can reduce eye irritation, reduce eye cell loss, and avoid channel blockage that increases energy consumption.

In 1903, the third Nobel Prize in medicine and biology was awarded to Niels Ryberg Finsen, who studied phototherapy. Because of his illness (a rare metabolic disorder known as Niemann-Pick disease), he found that sunlight had a palliative effect on his condition, and that sunburn was caused by excessive ultraviolet rays rather than by heat or other wavelengths of light. He also discovered that UV destroys genetic material and kills bacteria.

In addition, phototherapy is an effective treatment for seasonal affective disorders – mood disorders characterized by depression associated with a particular season, especially winter. 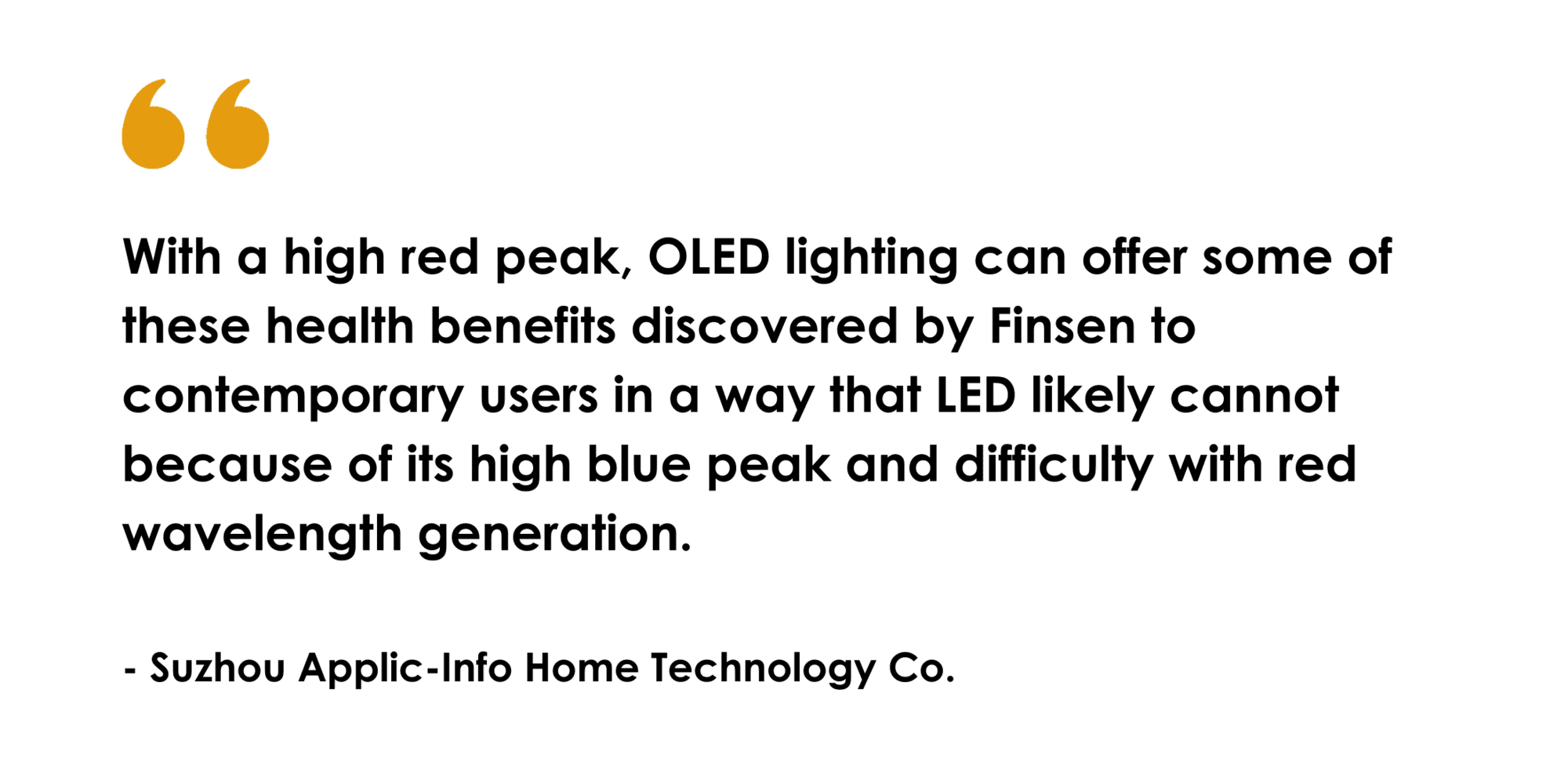 Last year, we received a comparative test report on visual fatigue of OLED and LED desk lamps. The test was completed by the Beijing Institute of Ophthalmology, and the main content of the experiment was to ask subjects of different ages to do a lot of text proofreading under different light sources. After a period of time, the vision decline, reading speed and accuracy rate were measured. In this report, OLED has a significant advantage, and some indicators even exceeded LED performance by 40%.

I feel that OLED is the closest artificial light to natural light. I think the main reason is that OLED is close to the ideal uniformity. OLED is fully luminous across its entire surface, while the brightness at any position and the direction of emission are consistent. With point light source lighting, the effect of a surface light source can be simulated by complex optical structures (lenses, curved surface reflections) or multiple refractions of light guide plate. However, the actual performance level is far below that of OLED.

To make an inappropriate analogy, this is a bit like the “analog sound” pursued by everyone in the hifi audio field. No matter how high the sampling rate of digital sound source is, it is still discrete after all. The vinyl record is completely continuous analog sound, and although the signal-to-noise ratio cannot compare with modern digital sound sources, it can provide more comfortable sound. 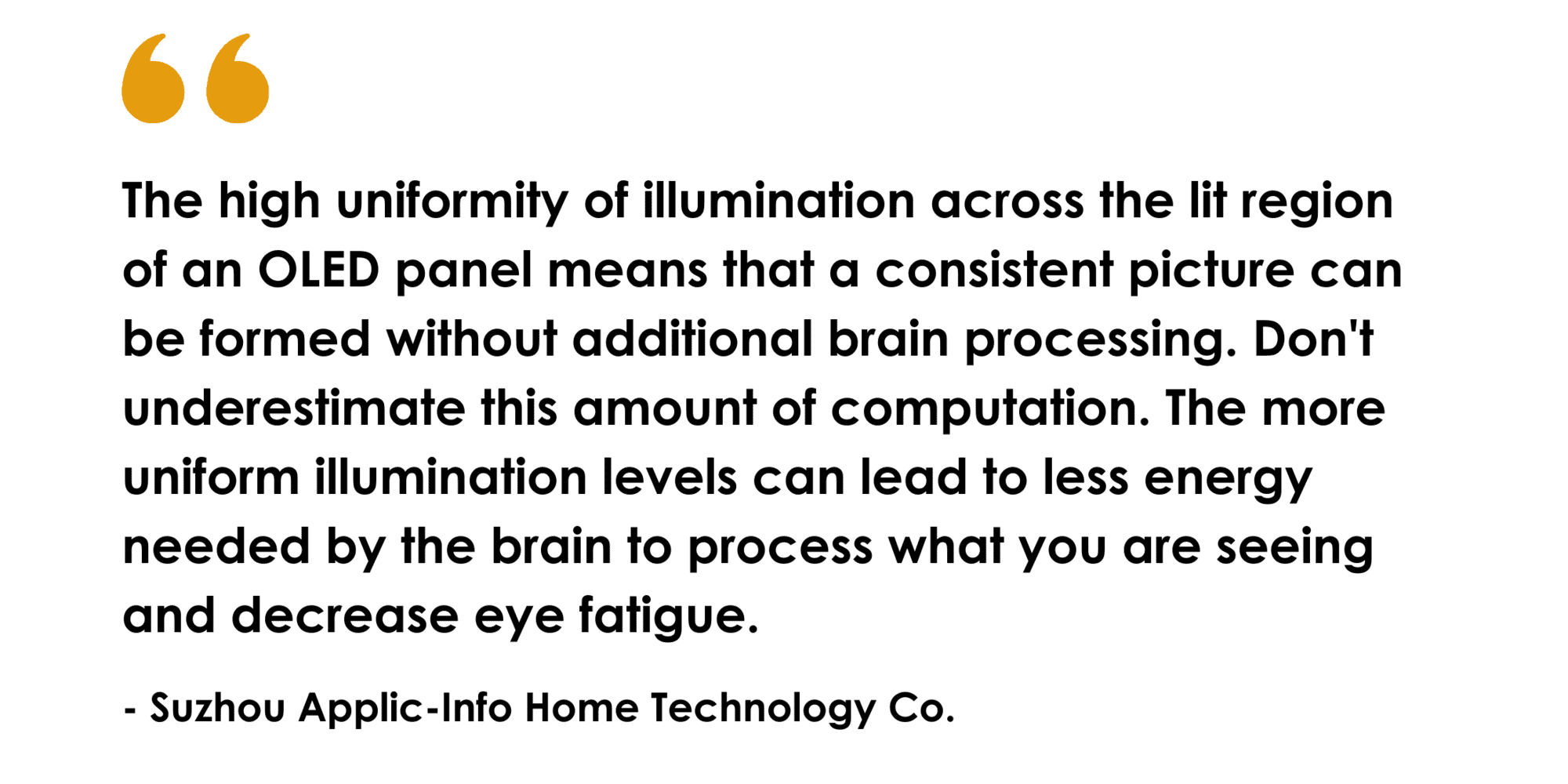 I believe that it is absolutely worth paying more for light if it is healthy, enables improved attentiveness, and reduced eye fatigue and discomfort. I hope this piece helps convince consumers to give it a try and feel the beauty of OLED light for themselves.

From Lumen-centric to Human-centric: The Lighting Revolution