A Closer Look: OLED Reliability Put to the DOE Test

By the OLED UX Team

The Department of Energy (DOE) has been on the forefront of new technology awareness and education to facilitate energy efficient technology adoption.  Consequently, the solid-state lighting (SSL) program has benefited from the unbiased evaluations conducted on behalf the DOE. Recently the DOE released a third-party report by RTI International, an independent research entity. This summary, Round 2 Update of Stress Testing Results for Organic Light-Emitting Diode Panels and Luminaires, Solid-State Lighting Technology Area December 2018, reports on the generational performance gains for various OLED lighting panels. Maury Wright, Editor in Chief at LEDs Magazine, penned an article highlighting the reported substantial advancements made while echoing RTI’s account that OLEDs continue to lag LEDs on performance.

This is worth a deeper look.

What is the actual light experience?

The Round 2 report looks at the second and third generation lighting panels from both LG Display and OLEDWorks. The results are normalized to initial, or time zero, parameters tracking the percent change over time regardless of the starting point. Based on this metric, the OLED solutions look very similar, as shown below.

Let’s consider how the actual, not normalized, performance compares. 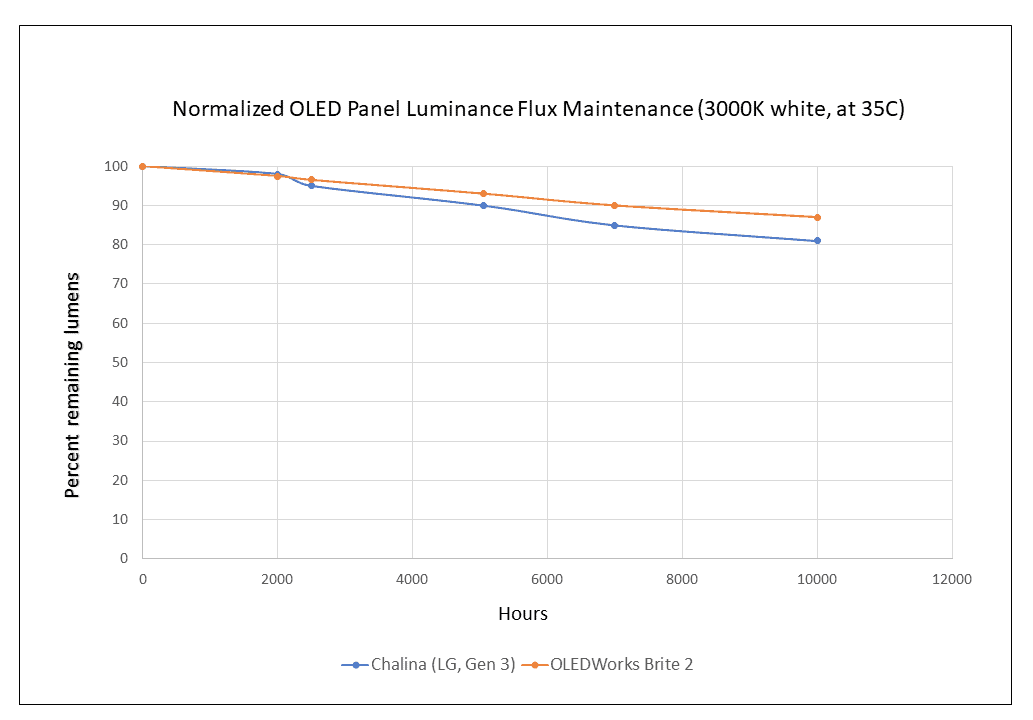 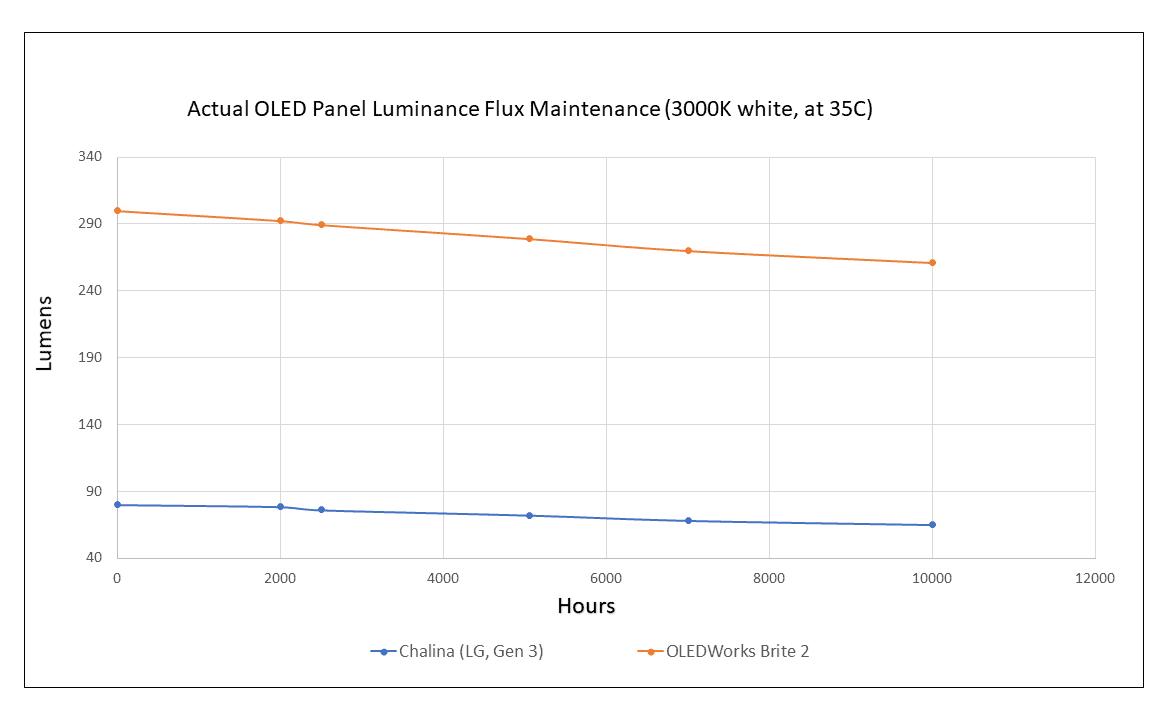 Even at high temperature accelerated conditions, both technologies have less than 15% light loss in 10K hours, but the sustained difference in brightness (200 more lumens!) sets the OLEDWorks products functionally apart.

Notably, the Brite 3 product from OLEDWorks is even more stable, about 3X, as indicated by the early RTI test results through 1500 hours and in considerably harsher conditions, 65°C and 90% RH.

Maury Wright reiterates RTI’s statement that OLEDs lag LEDs in lifetime as measured by luminance flux maintenance. On second look, we should consider apple to apple behavior based on application and brightness. For example, general office lighting troffer brightness is commonly about 3000 cd/m2. Alan Tulla, an independent UK-based lighting consultant, confirms this brightness level per European code EN 12464-1 (a common standard for work place lighting shared by EU member countries since 2003) and notes that office areas with high computer use could be as low as 1500 cd/m2. 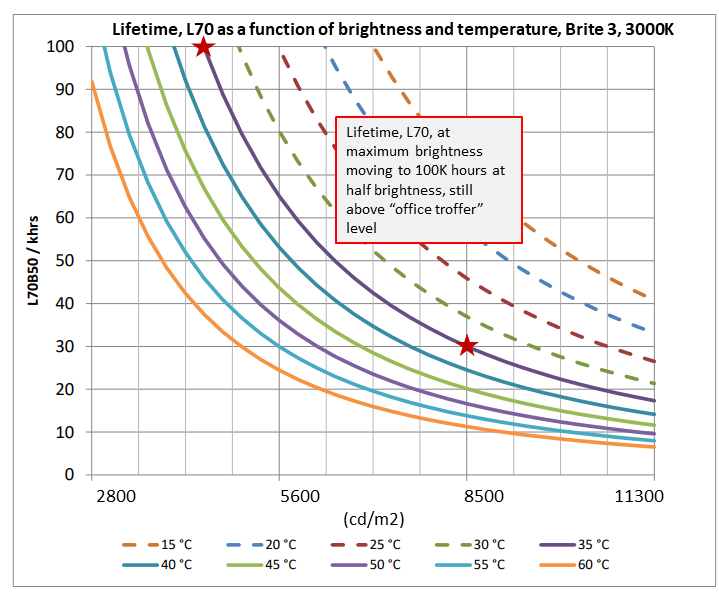 These brightness levels are significantly lower than the maximum (8400cd/m2) rated luminance for the Lumiblade Brite family platforms. At this maximum luminance, Brite 3 L70 lifetime is now a respectable 30K hours and RTI’s early data independently supports this projection. However, lifetime tracks with brightness levels – when operated at lower brightness the OLED panels lifetime is significantly extended. For example, the L70 lifetime for Brite 3 at 3000 cd/m2 is 100K hours – matching the expected performance of the best LED retrofit troffers.

Lumen maintenance is not the sole metric for reliability.  Color stability is also important – are the panels staying on their white point or are they aging into green, blue or yellow hue? Per the RTI accelerating testing, both LG and OLEDWorks have made significant strides in color stability with each new panel generation. For example, OLEDWorks warm white Brite 2 panels, at 45°C test conditions, shift less than 0.004 (Δv’, Δu’)and initial results (1500 hours) for Brite 3 indicate even better stability.

But what does that mean?  Is better good enough?

LEDs have long struggled with color stability, due to high internal thermal issues that degrade the LED phosphor system. OLEDs do not use phosphors, nor do they generate concentrated and debilitating heat. For OLEDs, the trick for color stability is to optimize the OLED formulation so that all emitters, red, green, blue, age similarly. In April 2017, the DOE, with the Next Generation Lighting Initiative Alliance, published LED Luminaire Reliability: Impact of Color Shift detailing that LEDs can range from Δu’, Δv’ shifts of 0.002 to 0.008. OLEDs are now consistent with the better performing LEDS reported here. They are more than good enough.

Progress is real and significant – but is it making a difference?

The DOE independent studies are a significant contribution to educating the market on new lighting technologies. A salient conclusion from the RTI report is that OLED continues to make significant improvements in lifetime, color stability, and energy efficiency. Under harsh and accelerated test conditions, OLEDs are more rugged and predictable than ever, positioning them for meaningful implementation in lighting solutions. Reliability and predictability are critical to lighting specification. OLEDWorks panels have consistently performed as forecast and at light levels higher than any other OLED solution.

OLEDs are being qualified for the very challenging automotive market. These designs are inspirational while the performance is demanding. OLED deliver here, surely, they will deliver for general illumination.

Acuity Brands Lighting has been paying attention, never losing sight of the unique opportunity afforded by OLED lighting. Now, with Brite 2 and Brite 3 performance, they are realizing designs previously unimaginable.  Their trust in the OLEDWorks portfolio is shared in their recent announcement for OLED luminaires.