Digital OLED Technology is the Future of Taillighting [Audi Presentation]

The following is taken from “DIGITAL OLED for Taillighting – Most Efficient, Homogeneous, and Flexible Display Technology”, written by Audi’s Dr. Michael Kruppa and Dr. Werner Thomas, presented by Dr. Kruppa at the 2019 International Symposium on Automotive Lighting

Since 2016, OLEDs are applied in automotive tail lamp applications. This innovative light technology is utilizing unique properties, which fit perfectly to tail lighting. Best in class contrast ratio, smallest overall package, and a better optical system efficacy for surface light than LEDs enabling the application of OLED in more and more tail lamps. Overcoming the biggest obstacles like reliability and cost, OLEDs are ready for a larger roll out. Combining those properties with a high number of segments on each OLED element, automotive exterior displays can be created within a tail lamp. The usage of those Digital OLEDs will lead the way to premium Car2X communication. In combination with new approaches on bendable glass to produce an OLED Audi will lead the application of the most flexible display technology in taillighting – Flexible-Digital-OLED. 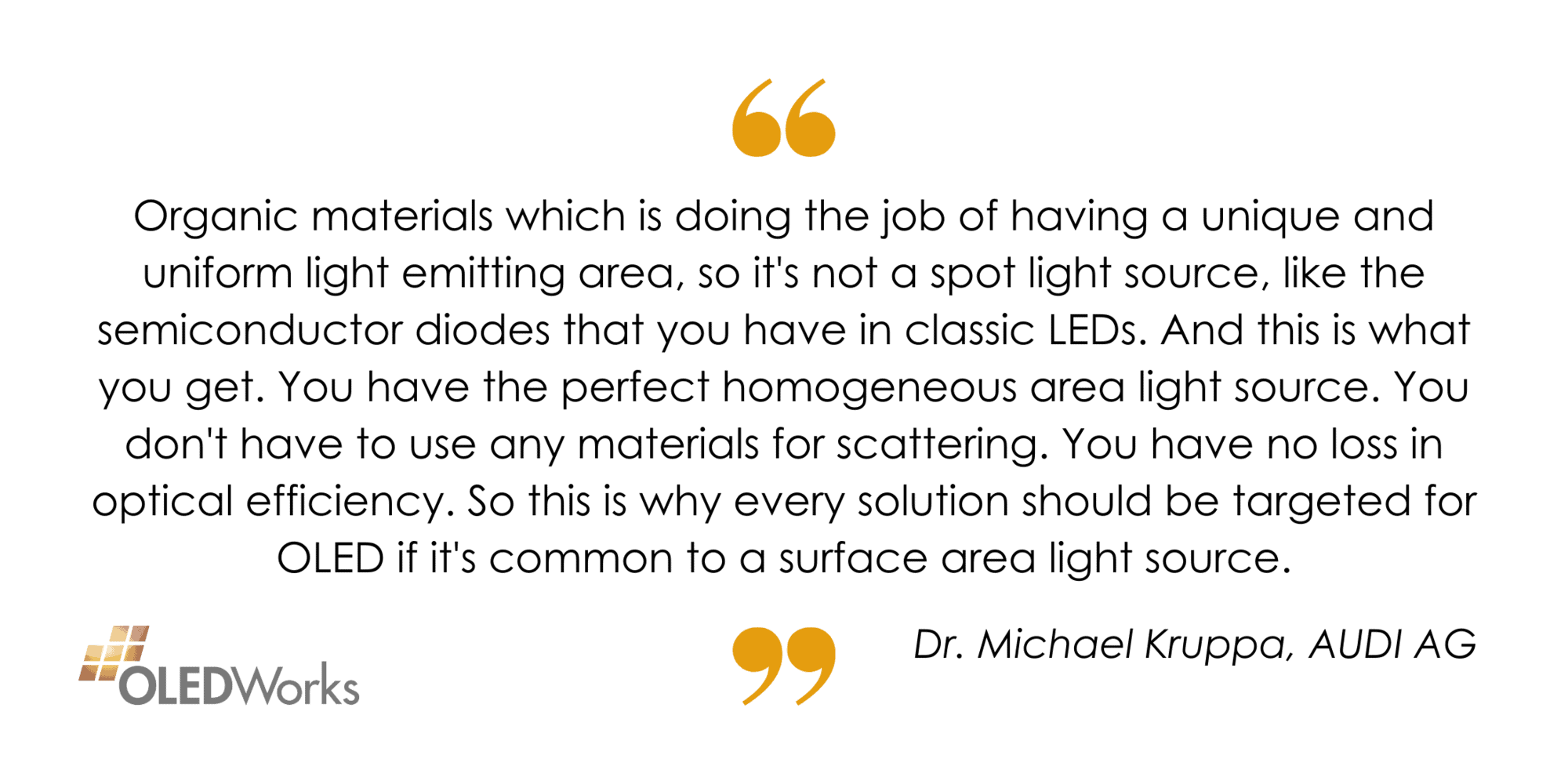 Taillight applications are suffering from an intrinsic property of LEDs being a point light source. To enable surface illumination in tail light, stop light, and turn indicators optical solutions need to be installed for light scattering. Inner lenses with defined light distribution combined with several small- to mid-power LEDs are enabling a more or less homogeneous illuminated area, whilst being challenged in achieving a proper light distribution and lacking of good optical efficiency.

Continuous optimizations as well as innovations in combining new LED packages and micro lenses are suitable means to reduce foregoing restrictions. However, an intrinsic problem remains: the use of a point light source to illuminate a defined area. Therefore, it is time for another light source revolution in tail lighting.

Since three years, a new light source is ready for automotive exterior applications: OLED –Organic light emitting diodes [1,2]. In contrast to the LED point light sources, made of semiconductor crystals, OLEDs are surface light sources made from organic polymers[3-9]. To create a homogeneous illumination, the OLED technology does not require any reflectors, light guides or additional optics. Therefore, OLEDs can be applied highly efficient, within minor package requirements, and minimum weight for the overall optical system. By this approach, we at Audi open up revolutionary new approaches in combining highly attractive design with complete new functionality and versatility: Digital OLED is formed. Those light sources will lead to the most efficient and flexible light application for Car2X communication and personalization in rear combination lighting.

A unique selling point for OLEDs is the ability to perfectly illuminate a defined area. As light is being created uniformly in the organic layers, no further scattering by additional lenses is needed. By this intrinsic OLED property, high uniformity levels above U = 0.8 (U=1-(Lmax-Lmin)/(Lmax+Lmin)) can be achieved easily. 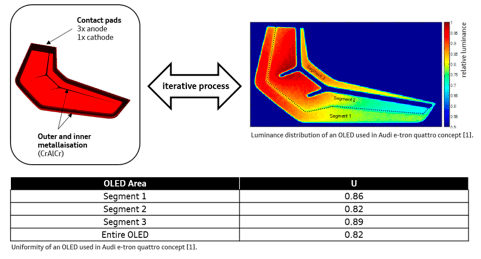 This uniformity cannot be reached meaningfully by optical solutions applying LEDs. The direct surface light characteristics, also enables another key property of OLEDs, which cannot be copied by any other lighting technology: the ability to have a very sharp contrast ratio between different active regions in one OLED panel within very small distances, i.e. individually controllable segments with sharp cut-off and small segment distances (<100μm) can be achieved within one OLED [10]. No light scattering, cross-talk between segments or other optical effects are disturbing the precise cut off. First series applications have been commercialized in the AUDI TT RS and AUDI A8 [11]. 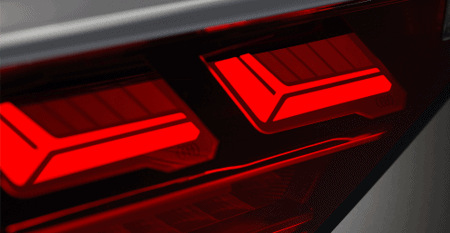 One of the major technical challenges in tail lamp development is to find an attractive, optical efficient, electrical efficient and robust solution to create homogeneous light distributions within the required areas.

OLEDs are inherently surface light sources, i.e. they create homogeneous surface light directly within their full active region, and hence no auxiliary scattering devices, e.g. inner lenses, are needed. LEDs are point light sources. With the help of micro lens arrays or scattering materials, light distribution in designated areas can be obtained. However, the price for this optical “modification” is a dramatic system based optical efficacy loss. For direct LED/OLED comparison, we installed 9-16 TOPLED LST676 LEDs in a 40mm x 40mm box built of white polymer.

In a distance of 15 mm different diffusive polymers (ALBIS and DF23) have been applied to provide a proper light mixing of the point light sources. To improve the homogeneity we increased the thickness of the scattering material up to 3 mm. The results are shown in Fig. 4 and 5. 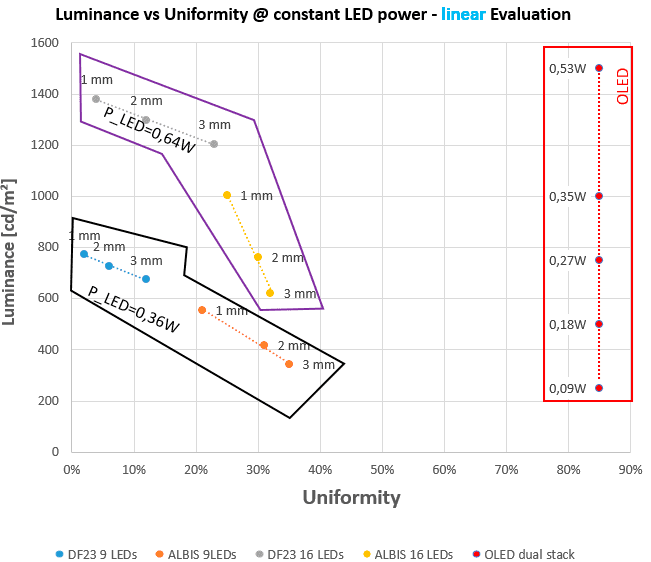 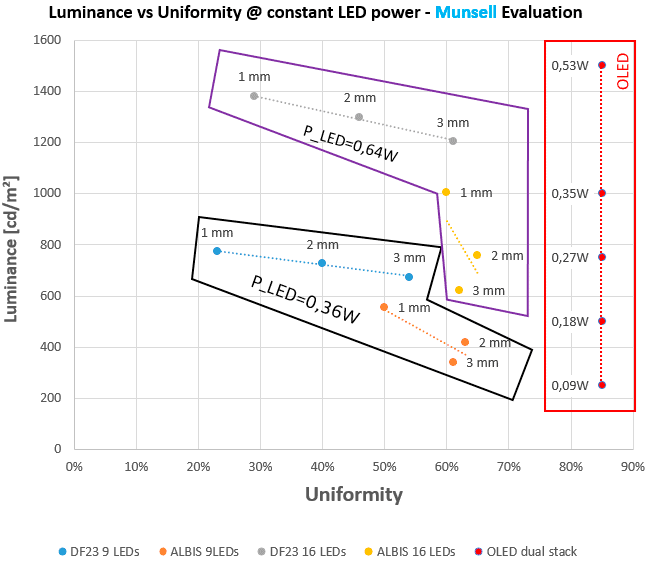 In all considered scenarios the OLED has a higher uniformity and reduced power consumption than LED solutions.

In all considered scenarios using LEDs in combination with scattering inner lenses the OLED approach has a higher uniformity and reduced power consumption. Increasing the uniformity of the LED based solutions, by increasing the scattering, shows a significant luminance drop of the simulated systems. Within the used OLED package (1mm thickness), no LED solution with the required optical efficiency and homogeneity is possible.

The feature of high contrast at small distances between segments within one OLED tile can be beneficially used for new applications. Today, only a low number of segments (N<5) is used, like in the AUDI A8 where segmentation is used for novel animation effects. New innovative approaches by Audi and OLED suppliers like OLEDWorks are modifying the complete OLED into a highly segmented display. While utilizing existing processes and materials to produce this segmented light source is fulfilling all known reliability requirements for automotive exterior lighting.

More than 50 segments per OLED tile are opening up more or less an infinite number of combinations of different segment states. Having those installed in taillight applications it is possible to change the shape and appearance of the taillight signature by simple digital information. Hence, the OLED light source enables the personalisation of the tail light design. Therefore it is not needed to change the hardware of a rear combination lamp; plenty of designs can be covered due to specific OLED and OLED-segment design, as illustrated in Figure 7.

In contrast to display technologies, each segment can be designed individually and no regular (grid-) pattern is needed. Hence, significantly different segment shapes and sizes within one OLED panel are possible. Thus, precise patterns can be directly created by the segment shape instead of using a multitude of tiny OLED segments requiring complex driver electronics and suffering from edge aliasing effects. In addition, high luminance values of ≥ 2.000cd/m² at deep red colour coordinates (λdom ≥627nm) are already possible, outperforming display based approaches in this application, by far. By following this approach, it is also possible to develop one OLED module that can be used in many different cars while still being able to provide an individual design of every taillight signature. This is opening up a huge potential to initiate a dramatic cost down process for OLED applications also in A- and B-segmented cars [12].

Next to design driven modifications of the taillight signature, it is now also possible to take this highly segmented taillight to display further information in the rear of a car, e.g. for following traffic or pedestrians. While sticking to the possibilities that are provided by current regulation, digital information within the car or provided by the swarm of connected cars and infrastructure can help to improve the safety and gain trust in the field of autonomous driving cars. 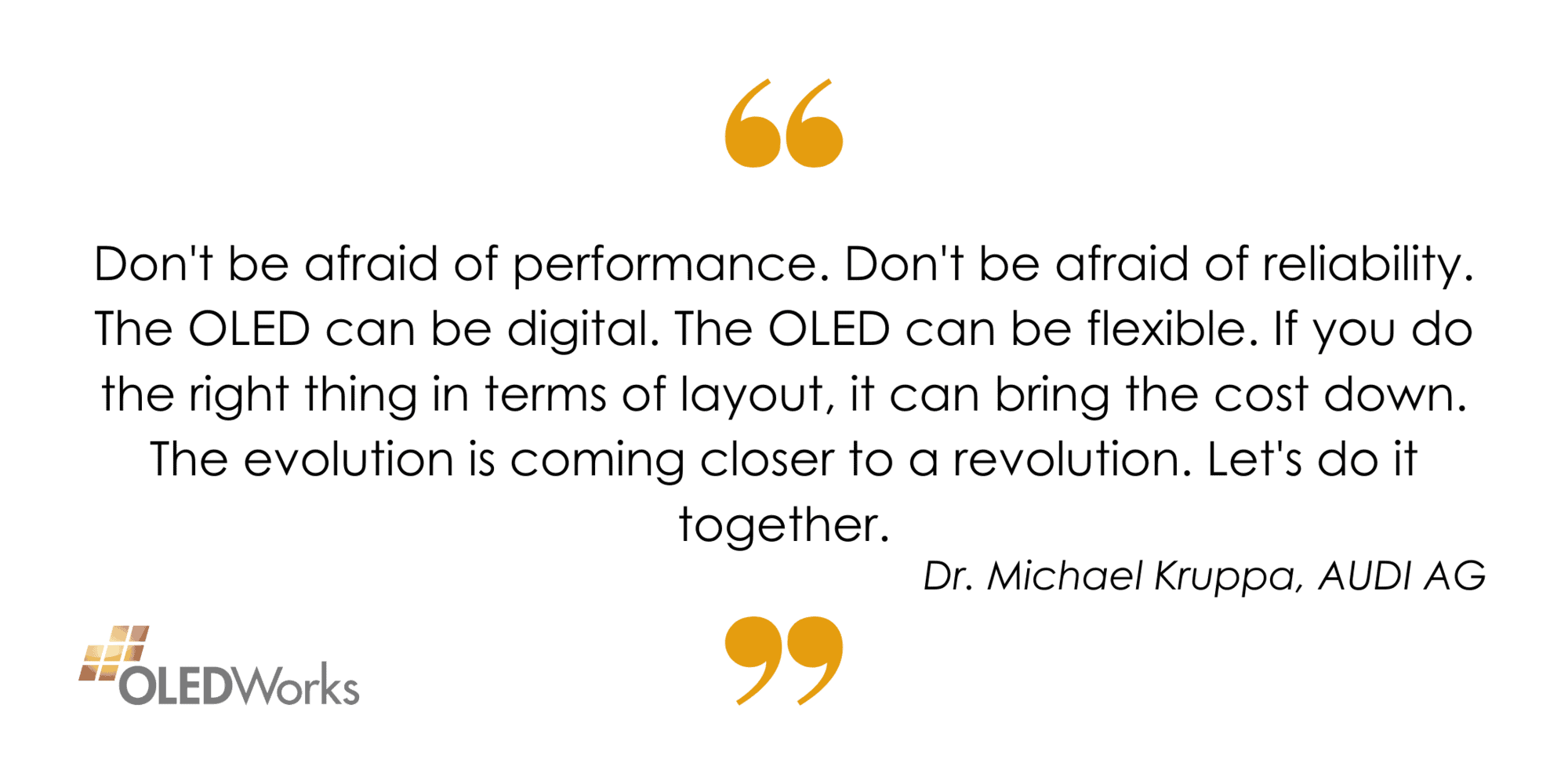 Considering alternative technical solutions for this rear car communication – LED displays – are unable to compete with the package, homogeneity and contrast ration and flexible segment configuration of a multi segment OLED panel that we name DIGITAL OLED. The functional use of this feature has just started and will leap-frog all other standard approaches utilizing LEDs. After having installed the mentioned high number of segments the real revolution is accomplished by combining the multi-segmentation with the possibility to use flexible substrate technologies [13].

Today, all mass production OLED tail lamps are utilizing planar glass substrates limiting the degrees of freedom in integrating the 2D OLED panels into a 3D curved lamp design. To further utilize the complete package of Audi tail lamps, OLEDs need to follow the wrap around of the car. Hence, the application area of OLEDs in exterior lighting can be greatly increased and the entire lamp can be covered with OLED panels. For this, flexible substrate technologies are needed and have to be adapted for the usage in automotive lighting applications. The flexibility of the substrates can be used as means to bend the OLED in the lamp production, creating a 3D OLED module that fits the curvature of the car. 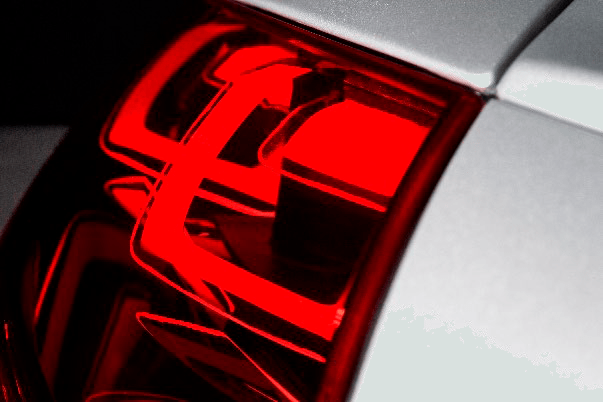 In combination with its viewing angle independent color point stability and homogeneity, light weighted thin flexible OLEDs will be a unique light source for tail lamps which can never be mimicked by any other light source. The most flexible display for exterior lighting is born: FLEXIBLE-DIGITAL OLED. First successful developments of OLEDWorks in combination with Willow Glass from Corning are opening this path into a new lighting future and the revolution has just began.

It has been proven that OLED lighting can be applied in automotive without any risk. BMW, Daimler, and Audi are using this technology in an impressive manner. To further push the substitution of LEDs by OLED in tail lamp applications, a significant cost down program is needed. By DTC (=design to cost) and module based approaches OLED will reach a highly attractive cost situation to further roll out the light source of the future [12].

The OLED is more than just an area light source which is homogeneously illuminated. New functions have already been implemented by segmentation which can only be applied meaningful by OLEDs and no other light source. It enables personalization of tail light designs and Car-2-X communication capabilities, making the digitalization of cars visible to the outside world. Flexible DIGITAL OLED technology will boost the integration and visibility of OLED-lighting in automotive tail lamps. The revolution has just began – be part of it.

[Webinar Q&A] Why OLED for Automotive Lighting: The OEM and Supplier Perspectives

Interviews with Audi – OLED Technology for Communication and Safety